I think I first met Joe Greene during the 11th ICTF & 19th. Mexican Vacuum and Surface Science conference in Cancun in 1999. I remember being fascinated by his course on Nucleation and Growth of Thin Films and, in particular, how he answered questions even when they weren’t, well maybe, carefully thought out. I seem to recall that we had a chance to enjoy a couple of beers during at least one of the conference parties. The other day I remembered next seeing him at the RIVA-5 conference at the Universidade do Minho, Guimarães, Portugal in sept. 2005. I very clearly recall walking out to the garden after registering and having a chat with Vasco Teixeira, and seeing Joe sat in the sun, shorts and sandals with a pile of papers and, if my memory is correct, a Portuguese beer, probably either a Super Bock or a Sagres.  I must have seen him in various conferences between 1999 and 2005, but either my memory is not good enough or our connection was just in passing. We were both at the XXI Congreso Nacional of the Sociedad Mexicana de Ciencia de Superficies y Vacío in Mazatlan in 2001, Joe, as he often did, gave an invited talk and a mini-short course. I also went to a couple of ICMCTF meetings in between 1999 and 2005, but I am not quite sure which I went to and when my student Martin Flores presented the work. As always, the San Diego meeting has never been a very good time to get together with either Joe or Phyllis, his wife, they were forever incredible busy with endless details during the conference. I do remember some interesting chats over a few beers, it was always fun.

The other day I went through the proceedings of the Mexican International Conferences on Surfaces, Materials and Vacuum, for when I was the organizer, and that lead me to have a look at all of the information available from all of the old meetings, including when it was a national rather than international event. It was quite amazing to see that Joe either gave a plenary talk or, that and a short course in 1999 (Cancun), 2000 (Puebla), 2001 (Mazatlan), 2003 (Huatulco, in the photograph you are in the back below the red line), 2004 (Playa del Carmen), 2005 (Zacatecas), 2006 (Puebla), 2007 (Oaxaca), 2010 (Playa del Carmen), 2011 (Puerto Vallarta), 2013 (Merida) where he presented his pioneering work “Tracing the History of Inorganic Thin Films from ~3000 BC to the 1900s AD”, 2014 (Ensenada), 2015 (Puebla) where he gave another fascinating talk “ The 14-billion year history of the universe leading to modern materials science” and in 2018 (Playa del Carmen). That was a lot of effort and support to Mexican science, and on behalf of a very large number of friends and colleagues, I think it is correct to say to Joe “Thank you very much indeed”. 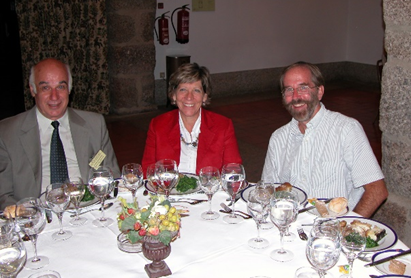 In 2020 just before COVID hit I acted as an external examiner for a Maltese doctorate student of Adrian Leyland in Sheffield University. I must say that during the exam Joe was very much present, since the first reference in the thesis was Joe’s paper “Tracing the recorded history of thin-film sputter deposition: From the 1800s to 2017”, and given that the theme was how to deposit a nitrogen doped stainless steel film on to stainless steel substrates, she did have a few more of Joe’s articles and some others by Joe and Diederik Depla. It was clear that Joe’s work very obviously influenced and fostered her research. Then two weeks ago, I was asked to revise a Master’s degree thesis of a student from the Centro de Nanociencias y Nanotecnologia of the UNAM in Ensenada. The first reference in her thesis was “Tracing the 5000-year recorded history of inorganic thin films from ∼3000 BC to the early 1900s AD” again by Joe Greene, and since the work was on OES measurements of reactive sputtering, she also included many of his papers and those with Diederik. So, I can definitely guarantee Dr. Joe Greene’s work is very much appreciated, being used, and is a sustaining force behind a lot of research.

We are pleased to inform that we have received a considerable number of contributions in the last few days. In response to the suggestion of our members, we are happy to announce that the Organizing Committee of the XV ICSVM has decided to extend the deadline to receive abstracts until July 10th, 2022.

This extension will give a little more time to those who are still working in the process of submission.

Please check the deadline and other important dates at the following link:
https://www.smctsm.org.mx/XV_ICSMV/dates.php

This XV-ICSMV is expected to be of exceptional interest, with Plenary and Invited talks presented by world leaders in the fields of interest to our Society, together with contributions from our members.

It is important also to remember you that the Deadline for Hotel reservation are July 20th 2022, the high demand that is expected will significantly increase the hotel fare, so we urge to reserve as soon as possible, the details are on the following link